Researching sandwiches (and then making and eating them) is what I do in my spare time. It’s a hobby, and if you’re guessing that it’s mostly an excuse to eat a lot of sandwiches, you’re not far off the mark. It’s interesting though, and I occasionally come across an intriguing clue, the sandwich equivalent of a rabbit pulling a watch out of his vest pocket – you can’t help but follow where it leads.

A few months ago while looking through scans of old Chicago menus from the John W. Shleppey Collection I found one such reference in the McFarlin Library at the University of Tulsa: menus from two different Chicago restaurants from the 1950s, both of which offered nearly identical sandwiches called Bal Tabarin.

Down the rabbit hole

As it turned out, both restaurants were located in the same hotel: Sherman house. For nearly 150 years, this hotel (in one form or another) stood on the northwest corner of Randolph and Clark in downtown Chicago. The fourth, final, and grandest iteration of the Sherman House was built on this site in 1911. Its amazing amenities included a rooftop Georgian mansion reserved for only its most important guests: presidents, senators, famous explorers and entertainers. Its largest banquet hall could accommodate up to 2,000 guests.

The second floor dining level, dubbed the “College Inn,” boasted a famous bar where jazz greats of the day would come to drink, a small ice rink where figure skaters entertained patrons, and the Well of the Sea room, the known for flying in seafood daily from both the Atlantic and Pacific Oceans and the Porterhouse Room known for its steaks. All were served by a single kitchen, and by the 1950s that kitchen was making the Bal Tabarin, their signature sandwich.

But where does the name Bal Tabarin come from? Among the Sherman House’s most alluring and frequently used features was a chameleonic ballroom with a “keyboard of light” or “color organ” called a Clavilux, designed through Thomas Wildfred and installed in 1929. The Clavilux allowed a single, centrally positioned operator to quickly change the room’s decor by projecting different phrases Lumia from twenty-seven places in space onto the walls. This ballroom, where up to six hundred people could dance into the early hours on some Saturday nights, was called Bal Tabarin.

Bal Tabarin wasn’t an uncommon name for American nightclubs back then, as it was borrowed from the name of a classic Paris hotspot. When the fourth version of the Sherman House was built, cabaret culture was in full swing in Paris. The opulent Moulin Rouge opened in 1889 and since then has hosted many of the greatest artists of the time on its stage as well as literal royalty in its audience. It was the height of La Belle Epoque, Paris was the world capital of nightlife and the famous French composer and conductor Auguste Bosc wanted to be a part of it. In 1904 he opened his own cabaret and gave it the name Bal Tabarin.

Tabarin is a word for buffoon, which comes from a 16th-century French comedian. ball means “ball,” of course, the kind of lavish dance party thrown by prince charming. Hence the name Bal Tabarin means ‘fool’s ball’, a spectacular if careless name for a nightclub that advocates a kind of reckless revelry. Many across the United States agreed, or at least desired, the notoriety that came with the name, and nightclubs called Bal Tabarin opened in New York, San Francisco, Los Angeles, and of course, at the Sherman House Hotel in Chicago.

In 1914, World War I ended the Belle Époque in France. After the war, however, cabaret’s popularity boomed across Europe, particularly in Germany. When the Germans invaded and occupied France at the start of World War II, Bal Tabarin, like many Parisian cabarets, remained open, a popular meeting place among officers of the occupying army. dancer Florence goods, herself secretly Jewish, performed on her stage at night while during the day she helped the French resistance hide other Jews fleeing the Nazis. After the end of the occupation and finally the war, Bal Tabarin passed into the hands of the owners of the Moulin Rouge, who closed it permanently in 1954.

Chicago’s Bal Tabarin outlasted Paris for nearly twenty years before the Sherman House Hotel closed in 1973. The Randolph and Clark building stood vacant until it was demolished in 1980 to make way for the new James R. Thompson Center, a lustrous, post-modern glass dome housing Illinois State offices. At the base of the Thompson Center’s seventeen-story, light-filled atrium is a food court that will house five restaurants in spring 2022, up from well over a dozen in pre-pandemic times. To my knowledge none of these restaurants have ever served a sandwich called Bal Tabarin. In Chicago, the ballroom of the same name and the cabaret sandwich have slipped unnoticed into oblivion.

But let’s be the freegans of culinary history for a moment and dump this sandwich from edible oblivion in the dumpster to judge if it deserves to live on, if only in our kitchens. It has definitely found a place in mine. The Bal Tabarin sandwich combines elements of classic club with the earthy and dry character of fine rye bread (although cumin doesn’t enhance the flavor of this sandwich, I use seedless rye). The chopped hard-boiled egg and Thousand Island dressing combine to create a sort of easy, slightly sweet egg salad complemented by lettuce and tomato. It’s a wonderfully balanced sandwich as is, although you could stack it with turkey or chicken to give it a deli sandwich feel. 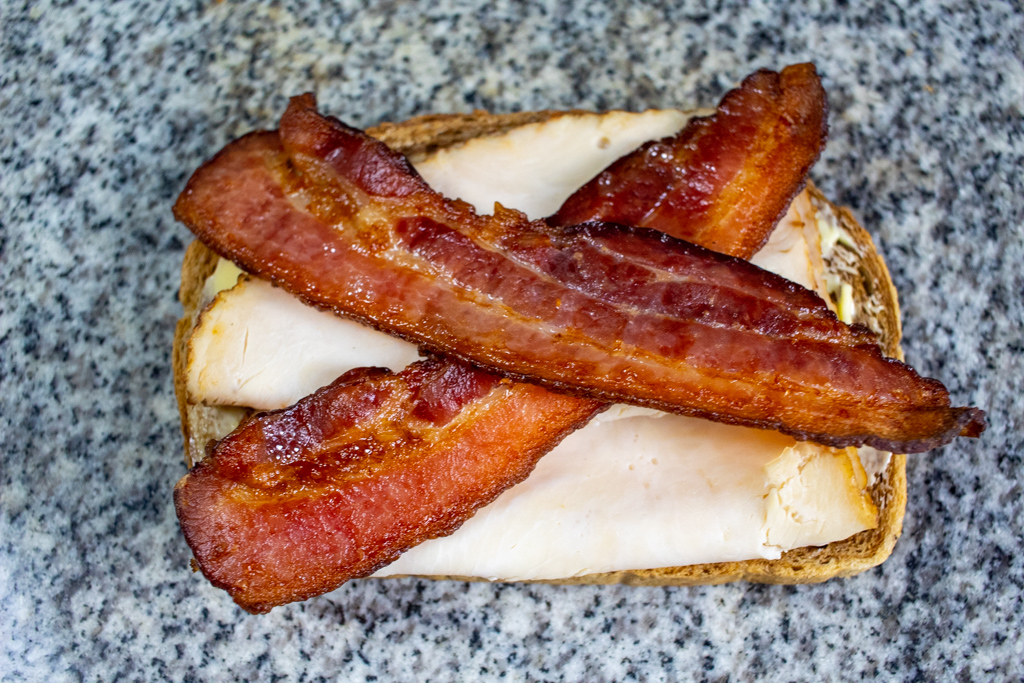 2. Place 2-3 tomato slices on the bacon. Season with salt and pepper 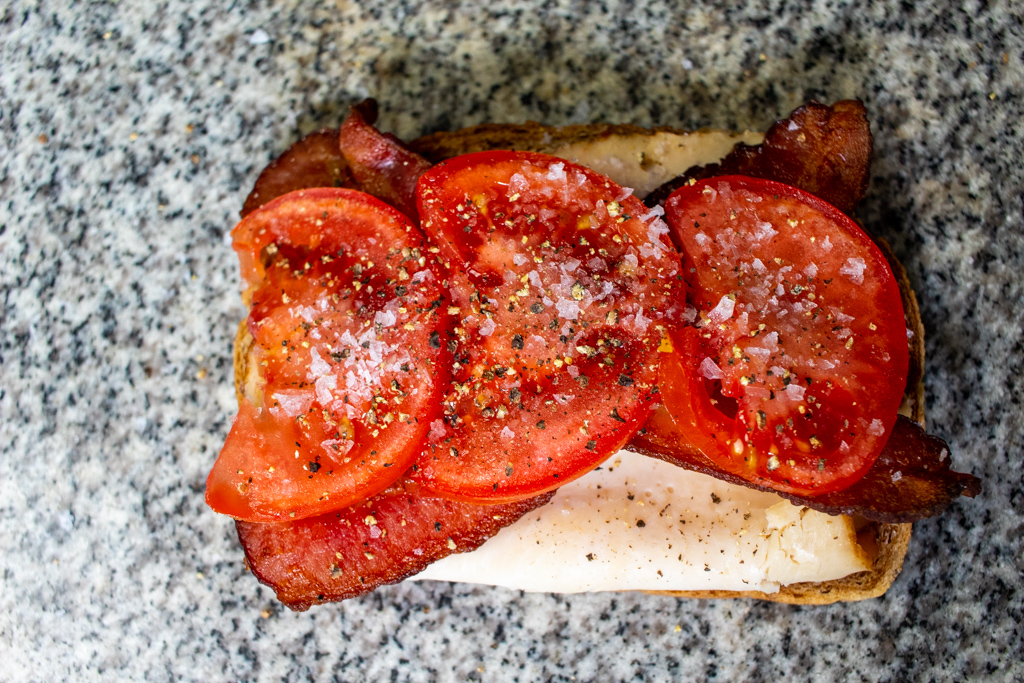 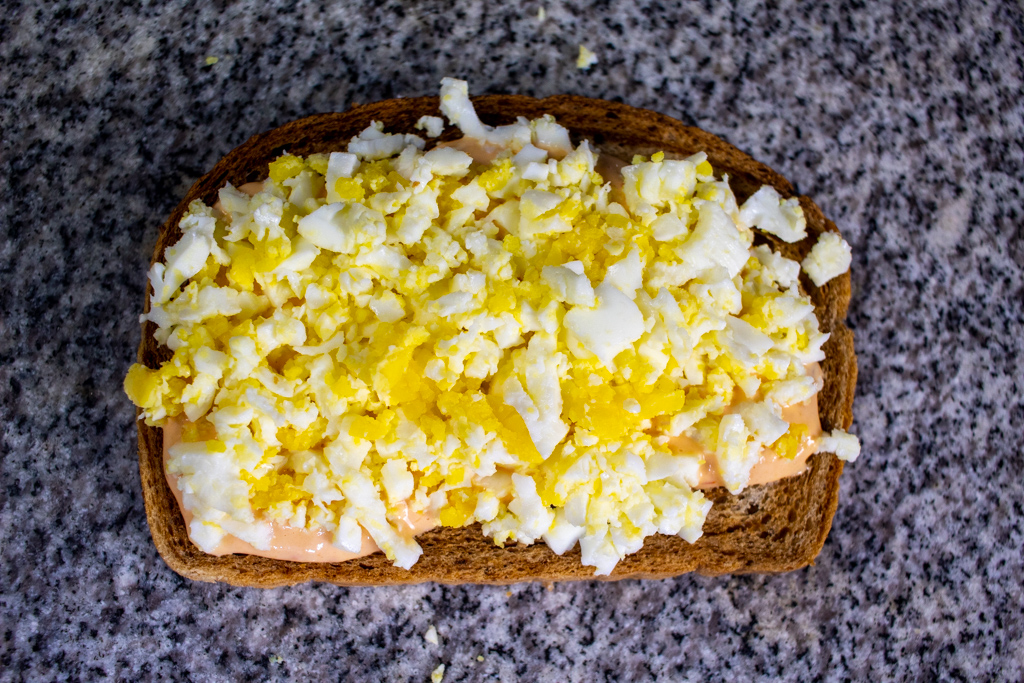 4. Place a leaf of iceberg lettuce, folded to fit the size and shape of the bread, on top of the dressing and egg mixture, then combine the halves to make a sandwich; Slice it in half at a snappy angle and enjoy a piece of sandwich and Chicago history. 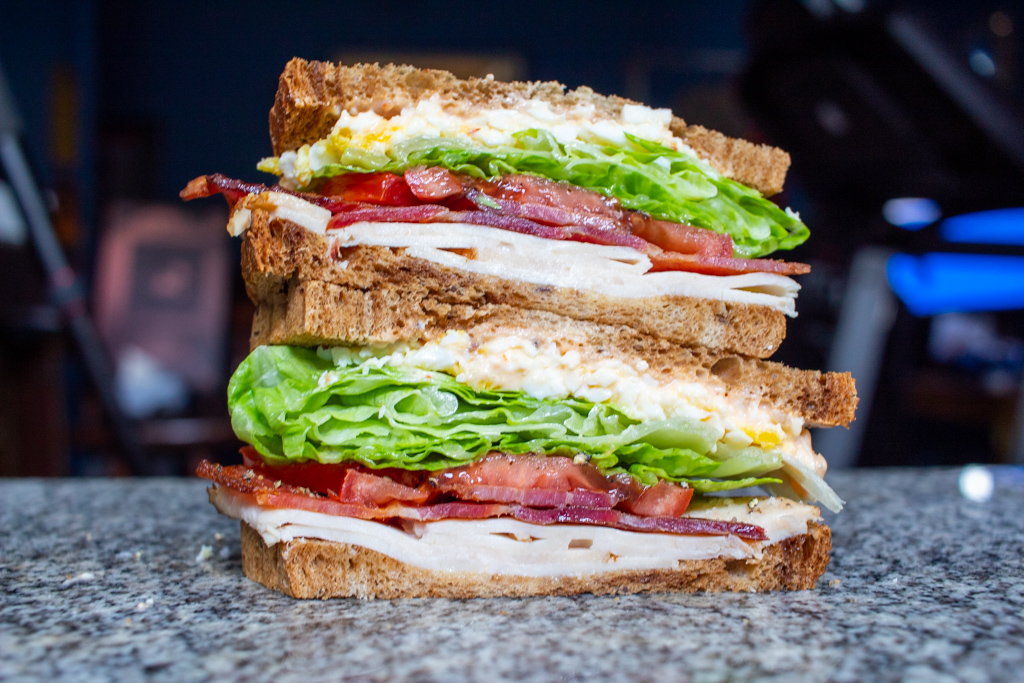